The D&D Sky Pirates campaign comes to an official close. 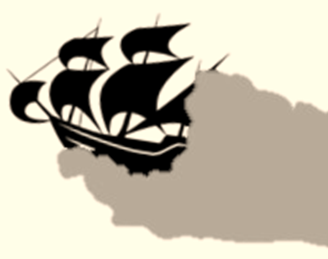 Back and forth the world seemed to sway, and slowly out of the darkness came colors and sounds. A gentle sigh of the wind passed overhead, and all around, wood creaked and strained under the pulsing of a hearbeat.

Louder and louder it throbbed, until the blood inside burst free and dripped to the ground. The heart had been torn out, taken. Del could see it, red and angry but still trobbing while a body slumped to the floor. Its eyes stared up at her, a scream of silence howling from its mouth before those eyes rolled back. They became nothing but white before rolling out, bouncing away across the floor and into the hands that held the still throbbing heart.

They were dark hands, hands that smelled of rot and anger, blue hands. They were the Oni’s hands, and he smiled a toothy grin at her, eyes flaring with red light before his black claws sliced together, scything through the pumping heart. It pulsed faster as it was rent, the pounding noise warping together into a violent, shrill sound of agony – her own agony.

Her eyes opened to the underdecks of a ship, some of the crew grumbling groggily at her as they rolled over. A thick woolen blanket fell from around her shoulders and slumped to the floor with a thud that sent shivers down her spine and startled her to silence.

Del blinked hard, but nothing changed. Snoring met her ears and the whisper of wind in sails sighed sweet melodies.

It had all been a dream.

In a flurry that almost sent those around her tumbling from their hammocks, Del vaulted through the ship, scrambling up onto the main decks and finding the moonlight pouring down. She bathed in its glow and laughed, a joyous sound of relief that pierced the night. The stars twinkled in answer, and she danced her happiness, the sound of footsteps coming forward to greet her.

“Caranthir! Vesryn! I had the most awful dream! I…” Del sang, but the words died in her throat as she turned. Ann and Tyrone, concern twisting their faces and their eyes wide, crept foward across the decks.

“Who are Caranthir and Vesryn?” the dragonborn coaxed.

“My sisters,” she whispered, backing away. “You were supposed to be a dream. None of that was real. It was a dream. It did not happen.”

“What are you talking about?” Ann implored.

Tears welled in her eyes, and Del collapsed with a sob onto the deck. “It cannot have happened. It was so awful!” she wailed.

Comforting hands steadied her shoulders. “I know it was awful, but it’s over now. You can go home.”

“No… I cannot,” Del whimpered, looking back at the town of Lullin fading into the dark behind them. “But I never have to go back there.”

As shown above in the cast section, not a lot of people showed up for what was anticipated to be our last session, so my husband gave us a tiny description and let us get to character generating for my campaign. Hopefully the starting session next week will have more than three players, but if push comes to shove, I can always repeat my intro a few times, as much as that might be odd.